“By blood, I am Albanian. By citizenship, an Indian. By faith, I am a Catholic nun. As to my calling, I belong to the world. As to my heart, I belong entirely to the Heart of Jesus.” — Mother Teresa

Saint in the Gutter – and Saint in Heaven

At the age of twelve, the Albanian Catholic girl, Agnes Gonxha Bojaxhiu, heard a call. God demanded that she devote her life to Him.

Mother Teresa was born Agnes Gonxha Bojaxhiu on August 26, 1910 in Uskup, Ottoman Empire (now Skopje, Shkup in Albanian, North Macedonia). Her family was of Albanian descent. At the age of twelve, she felt strongly the call of God. She knew she had to be a missionary to spread the love of Christ. At the age of eighteen she left her parental home in Skopje and joined the Sisters of Loreto, an Irish community of nuns with missions in India. After a few months’ training in Dublin she was sent to India, where on May 24, 1931, she took her initial vows as a nun. Her new name was Teresa.

In 2003, the Pope took the first step towards her canonization.

In 2016, Mother Teresa was declared a saint by Pope Francis.

Mother Teresa held her Acceptance Speech on 10 December 1979, in the Aula of the University of Oslo, Norway.

The Nobel Peace Prize 1979 was awarded to Mother Teresa: “for her work for bringing help to suffering humanity”

The Presidential Medal of Freedom 1985

President Ronald Reagan presents the Medal of Freedom to Mother Teresa, the Albanian Roman Catholic nun who won the Nobel Peace Prize for her humanitarian work, at a White House ceremony on June 20, 1985. Mrs. Reagan is at right.

“You have left humanity a legacy”, said the President, and called Mother Teresa “a heroine of our time.” 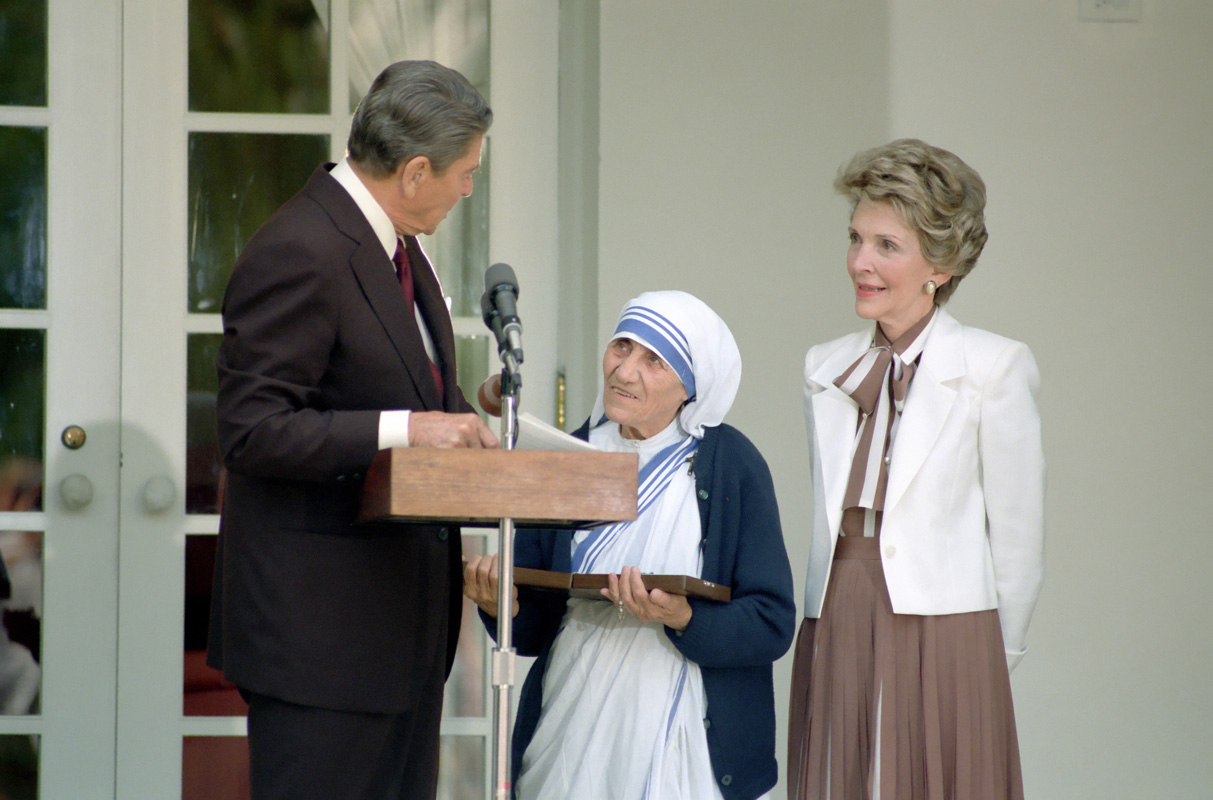 Charity, like the notions of volunteerism and philanthropy, provides real social bonding and contributes to the creation of inclusive and more resilient societies. Charity can alleviate the worst effects of humanitarian crises, supplement public services in health care, education, housing and child protection. It assists the advancement of culture, science, sports, and the protection of cultural and natural heritage. It also promotes the rights of the marginalized and underprivileged and spreads the message of humanity in conflict situations.

The International Day of Charity was established with the objective of sensitizing and mobilizing people and organizations all around the world to to help others through volunteer and philanthropic activities.

The date of 5 September was chosen in order to commemorate the anniversary of the passing away of Mother Teresa of Calcutta, who received the Nobel Peace Prize in 1979 “for work undertaken in the struggle to overcome poverty and distress, which also constitute a threat to peace.”

For over 45 years she ministered to the poor, sick, orphaned and dying, while guiding the Missionaries of Charity’s expansion, first in India and then in other countries, including hospices and homes for the poorest and homeless. Mother Teresa’s work has been recognized and acclaimed throughout the world and she has received a number of awards and distinctions, including the Nobel Peace Prize. Mother Teresa died on September 5th 1997, at 87 years of age.

In recognition of the role of charity in alleviating humanitarian crises and human suffering within and among nations, as well as of the efforts of charitable organizations and individuals, including the work of Mother Teresa, the General Assembly of the United Nations in its resolution A/RES/67/105 designated the 5th of September, the anniversary of the death of Mother Teresa, as the International Day of Charity