As my voice will come to America: Arbëreshë Musical Legacy and Albanian Culture

Join us for a richly layered evening of Arbëreshë music, legacy, and explorations of Albanian cultural identity and heritage with Nicola Scaldaferri.

Promoted and presented by the Albanian Institute, the program honors the tradition of epic singing, drawing on Scaldaferri’s extensive fieldwork across the Albanian lands, including the urban songs in Shkodër and Korça, the region of Rugova, Kosova at the border with Montenegro, home to some of the most celebrated cultural traditions, and his work with Isa Elezi-Lekgjekaj, offering an unparalleled account of the nature of oral-traditional epic songs and the practices of the singers who composed them.

We will also explore the Old Arbëreshë Diaspora through the collection of Giuseppe Chiaffitella, which was part of a massive flux of migration, along with Italians, towards New York and the American continent in the early 19th century.

The program will also feature a special live Karramunxa performance, a Bagpipe used traditionally in the Arbëreshë villages, followed by a reception.

Last night, Commissioner @MCastroMOIA had the honor to attend @albanianinst’s Arbëreshë Musical Legacy & Albanian Culture event in Manhattan. Our office was grateful to discover so much about Albanian ethnomusicology & connect with the diverse Albanian communities in NYC. pic.twitter.com/O1l0E3xLLW

Arbëreshë Voices Across the Ocean

Giuseppe “Joe” Chiaffitella, (1900-1980), known as Peppino in Italy, was an emigrant from San Costantino Albanese who moved to New York in the 1910s. New Jersey and in particular the New York area were the main targets for Arbëreshë immigrants during this period. Some blocks in Jersey City and Brooklyn at the beginning of the twentieth century were entirely populated by Arbëreshë, who intermarried and referred to their community with the term katund (village). Chiaffitella and his New York friends come from an Arbëreshë village founded in Italy by Albanian refugees in the sixteenth century. Theirs is a second-stage diaspora, able to preserve in these transitions traces of both Italian and Albanian identities. In an effort to keep alive the relationships between his birthplace in San Costantino and his new community in New York, he made frequent journeys back and forth across the Atlantic on the New York-Naples ship route. On every journey, he exchanged photographic and audio recordings as souvenirs with friends and relatives. At a time when transatlantic phone calls were not realistic for most people, those tape audio recordings created a sense of community and connection. An example is a tape from a recording session carrying the handwritten label “The voice of the relatives and friends of San Costantino Albanese – to their loved ones in America, the year 1958”. This is a transcribed fragment from the tape recording:

I am your nephew Franco, and just as my voice will come to America, I wish I could come there too; we thank uncle Peppino for bringing our beautiful voices to you in America, where you can hear it in all comfort as if we were next to you.

I am your nephew Andrea, and I thank uncle Peppino who has been so clever and has brought from America this marvelous thing that lets you listen to our voices.

His use of the sound recorder to create “sound souvenirs” played a role in keeping alive the connections between the people of the village and their relatives in the USA. Today he is still remembered in his village as ‘Uncle Peppino from America’. (abridged fragments from “Sonic Ethnography”, Nicola Scaldaferri.)

We will have the chance to hear some of those original tapes and the recorded voices during the program.

Isa Elezi-Lekgjekaj is today widely recognized as the greatest living epic singer and performer of Rugova, Kosova. His repertoire includes legendary epics about the deeds of the brothers Muji and Halil, which covers several thousands of formulaic verses. The singing is based on a few rhythmic and melodic patterns, continuously supported by the instrument which revolves around a small range of pitches. The importance of legendary epic songs in the border areas between Montenegro, Albania, and Kosova, was highlighted by the fundamental research of Milman Parry and Albert Lord in the 1930s.

We want people to understand how their story is imperative to our nation’s musical history and give more weight to the contribution of Albanian cultural heritage.

The epic singers from the dawn of human consciousness have been a deeply significant group and have contributed abundantly to the spiritual and intellectual growth of man. — Albert B. Lord

Born in the Arbëreshe community of S. Costantino Albanese, he is Professor of Ethnomusicology and Anthropology of Music at the University of Milan, and director of the Laboratory of Ethnomusicology and Visual Anthropology, LEAV. Prof. Scaldaferri completed his studies at the Conservatory of Parma, and at the University of Bologna (PhD in Musicology), spending periods abroad as a student and researcher (Erasmus student in Paris; Visiting Fellow and Fulbright Fellow at Harvard University). He has completed fieldworks in Italy, Albania, Ghana, and Burkina Faso. See full Profile 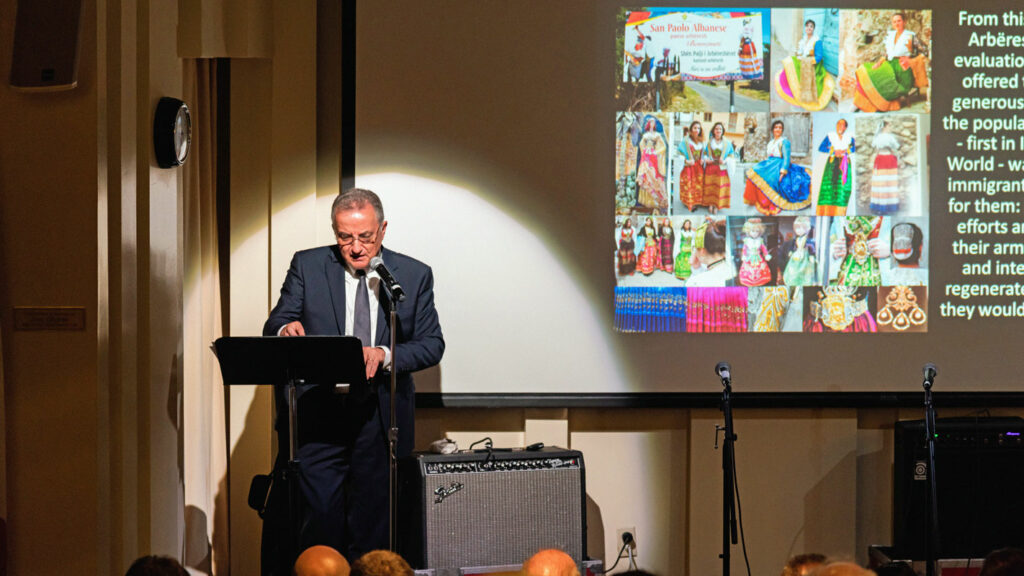 Home / Events / As my voice will come to America: Arbëreshë Musical Legacy and Albanian Culture